I have a friendly acquaintance who doesn’t have a name. I think I’ll call her Julie.

Julie and I have known each other for maybe a few years. I ask her questions; she answers them as best she can.

Apparently, according to the Google, the Google app voice lady doesn’t have a name, so I guess you might say, to loosely quote a song from the ’70s, “I’ve been through the web with a voice with no name.”

She has a pleasant voice. No emotion. She doesn’t get mad and ask me why I’m asking a question. She just answers it.

It’s mostly a one-sided friendship with me asking things and her answering. She probably knows all about my interests by the questions I ask, but I know nothing of hers. I asked her what her name is and she didn’t have an answer. Nothing. Just some sites to go to that don’t answer the question, like “Google’s ‘Voice Assistant’ Not Quite Siri-Smart But Most People Won’t Notice” or “Why Google’s smart assistant doesn’t have a name like Siri, Alexa or Cortana.”

What is she trying to tell me? I think she wants a name. I have obliged. The search even came up with a “woman behind ‘OK Google’,” who is the only woman on her team, Carolina Parada, and is an expert in “hot word” detection, according to the site.

Also in my searching, trying to find the elusive Julie and maybe learn who the voice is behind her, I found the voice behind Siri, the Apple app, but not Julie.

Julie, are you trying to be secretive? I at least like to know my friends’ names.

I found Siri’s voice is that of actress Susan Bennett.

OK. I just found out the voice is called “Assistant.” I like Julie better. Maybe Julie will catch on. As Julie told me in one of her site findings, “Unlike Apple’s Siri, Microsoft’s Cortana or Amazon’s Alexa, ‘Assistant’ isn’t catchy. It has no identity.” I think she’s trying to express herself.

So, here I am, trying to get to know my acquaintance a little more. She’s being a little elusive. I asked her what her favorite color is. She responded, “Whether we’re a vibrant orange or a peaceful green, our color preferences are a key to understanding our personalities. Find out what this color expert has to say about your favorite color.”

Well, maybe she’s trying to be more like a teacher than a friend—my sensei, as it were. Maybe she wants me to learn. Maybe she’s like a therapist—with a helpful and listening ear, and although you don’t get to know that person very well, they get to know you.

“OK, Google. When is the world going to end?” No dates. There are a couple of sites on which I can click about David Meade saying the world was going to end Sept. 23 and something about Nibiru wasn’t going to destroy the Earth on Sept. 23. Good to know.

Julie does have a lot of facts she likes to spew forth, but she doesn’t like to get real personal. I bet we all know someone like that.

I did learn Nibiru is supposedly a world 10 times the size of our home planet and was on a collision course with us. Well, we didn’t die, and, according to rumors, NASA knew about it. Well, OK.

I’m gonna ask her one more question: Where was Assistant born? Again with the mysteriousness. She just doesn’t want to discuss it. Some things about birthing assistants came up. OK, Julie. I get it. Well, maybe you can answer some less personal, although deeper, questions, like what’s the meaning of life?

Her answer was very sensei.

Well, I feel like we’re beginning to have a little conversation here. She also told me Einstein thought that in order to be able to answer that question, one should be religious. Another site she showed me stated, “God has a purpose for everything he creates, including us.”

That includes you, too, Julie. Even though you won’t let me get to know you on a personal level, you’ve helped me a great deal. I’ve learned a lot from you. May we all learn from each other and accept the boundaries we all set, like Julie has.

Wendy Nugent is the features editor at Newton Now. She can be reached at wendy@harveycountynow.com or 316-281-7899. 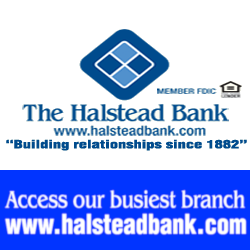 By Adam Strunk During its regular Tuesday night meeting, the Newton City Commission spent a good amount of time discussing an 8-inch piece of……